We decided to do some research on the differences among clothing manufacturers in different countries so you’d have more information when deciding which manufacturer and country to work with.

We assimilated data from a variety of sources to analyze the different attributes of apparel manufacturers in different countries. The data came from studies done by professors, various nonprofits, and journalists covering this area.

These are some of our key findings:

Textile and Clothing Exports by Country

When choosing a clothing manufacturer, you may want to pick one that’s in a country that already exports a significant amount of apparel. That way you know that there’s a developed infrastructure around the factory to solve deliveries and other issues.

Using the World Integrated Trade Solution calculator from World Bank, we found out how much textiles and clothing every country exported. We then put that data onto a global map so you can take a better look:

Here’s the same data presented in a chart. We also added the total amount of 2015 textile and clothing exports so you can see how the industry is changing:

One clear trend here is that China, even though it is the largest exporter of clothes and textiles, is losing market share to the rest of the world. We guess that political uncertainty and concerns about the trade war with America have a lot to do with that decline. As we’ll talk about later, fashion executives are making it a priority to diversify away from China.

Bangladesh and Vietnam both seem to be gaining from China’s loss. Even though they’re the second and third biggest exporters respectively, both increased their market share by over three percent. Despite those gains, keep in mind how much more China exports than the rest of the world, as it exports more than the rest of the top five combined.

If you want to work with a manufacturer in Europe, you have several options. Italy, Turkey, and Germany are in the top ten, but they have all lost market share. We imagine that higher labor costs are a major reason for Europe’s decline, but there are still significant reasons to choose Europe which we will talk about later.

Very little clothing is imported from Africa or South America. Even though the labor might be cheaper, our guess is that the business industry has decided that ,for now, these continents are too geo-politically unstable. If you do want to manufacture clothing in these continents, Brazil and Egypt are the biggest exporters in South America and Africa respectively.

For example, the nonprofit Micro Opportunities found that Bangladesh women garment workers earn less than minimum wage over 60 percent of the time . On the other hand, garment workers in America earn more than the federal minimum wage because certain states have a higher minimum wage and guaranteed benefits vary from state to state.

All of that shows how determining what garment workers get paid by country requires detailed analysis. The best source we found for actual garment worker minimum wages came from Public Radio International: 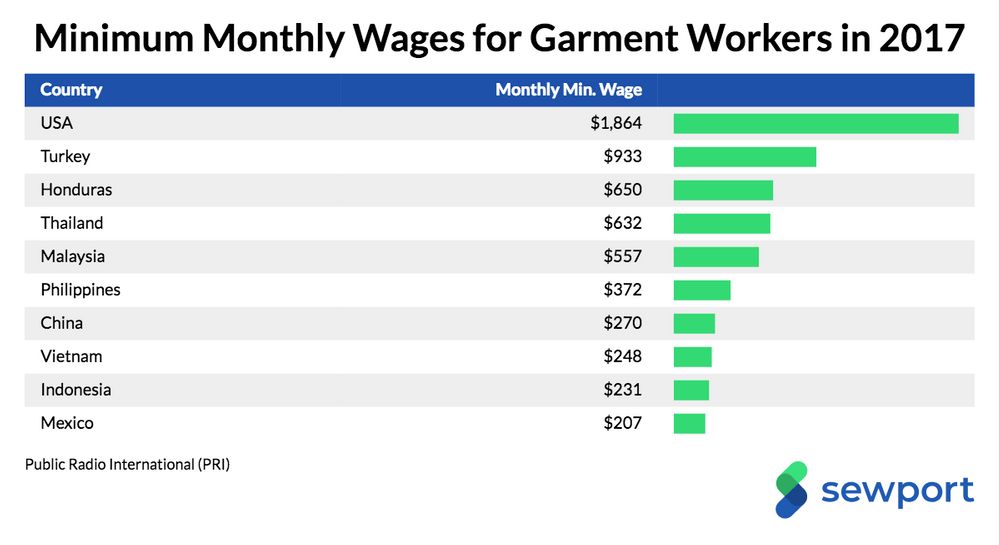 If you do want to get clothing manufactured in Asia, know that there is a significant variation from country to country. Thailand and Malaysia both pay its garment workers more than twice as much as China pays its garment workers.

Keep in mind that labor cost is only a small portion of the total cost of a piece of clothing. A study from Oxfam found that less than 4% of a garment’s cost goes to workers. That doesn’t mean that there aren’t significant variations between countries. Cheaper countries not only have cheaper labor but also cheaper overall operating costs.

If you’re picking a country to work with for the long-term, it’s important to know how much labor costs are increasing. The country that is cheap today may not be so cheap a few years from now. 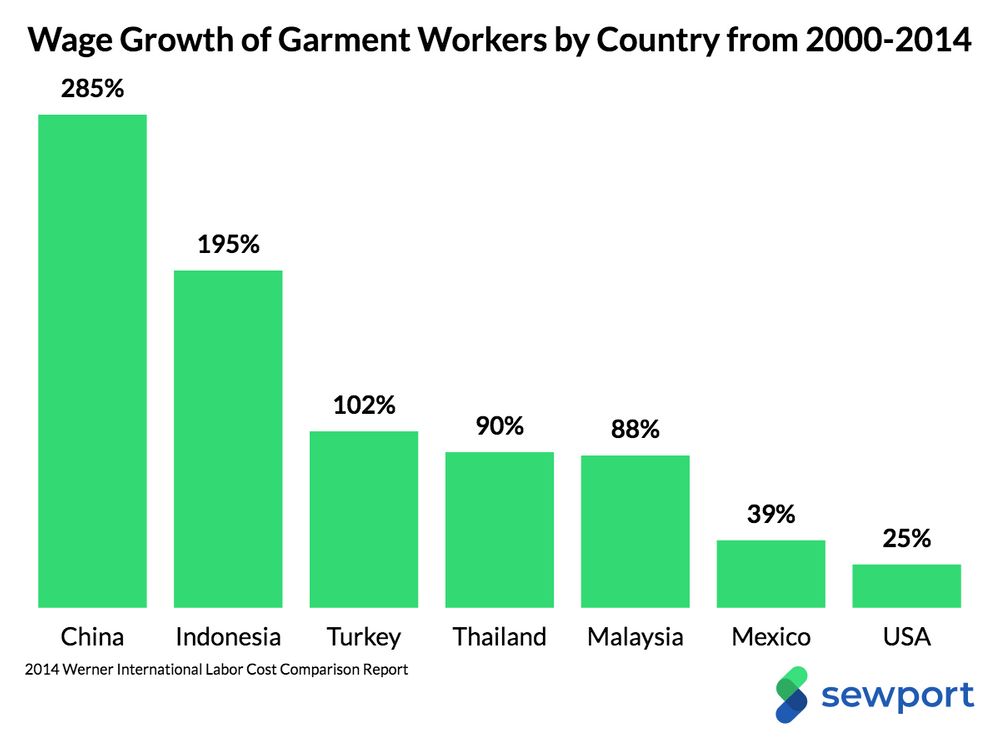 As we saw earlier, apparel imports from China and Indonesia have been declining. The rising cost of labor is a likely reason for that. At this rate, China’s labor will soon become much more expensive than other developing countries.

You would expect that in developed countries, wages wouldn’t grow too much. In fact, garment workers’ wages in America actually dropped when adjusting for inflation ! On the other hand, Turkey, another developed country, experienced significant wage growth.

There are significant local factors in play that affect garment worker wages over time. In some cases, the garment workers in developed countries can have higher wages that are also growing faster than those in developing countries. This is clearly the case when you compare Turkey with Malaysia and Thailand.

Mexico is unique in that it has low garment worker wages that aren’t growing quickly. We imagine that if the USA continues to move away from China (due to rising costs and political tension), there will be a big shift to Mexico (especially since it’s so close) and wages will at some point start to rise quicker.

The United States Fashion Industry Association does a benchmarking study every year where they survey the top executives at major fashion brands to analyze their thoughts on the state of the industry.

As part of the 2018 benchmarking study , they rated certain countries on a scale of 1-5 on various characteristics. Here are some highlights of their responses: 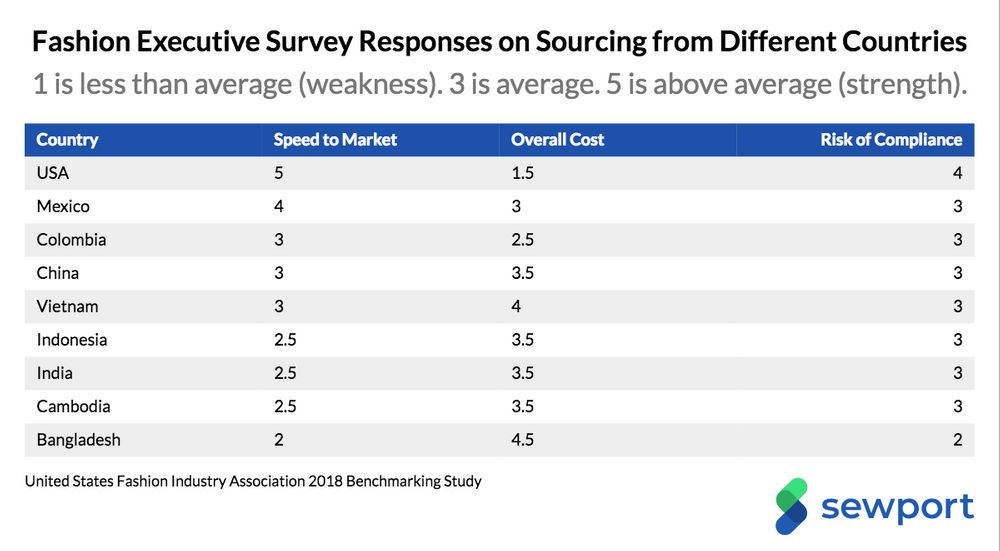 Keep in mind that these responses come from American fashion executives, that’s partially why they say that sourcing clothes from America is quicker.

Since the manufacturer is close by and is from the same country and culture, it makes sense that it’s easier to optimize delivery times and make sure that all relevant laws and regulations are being followed. The tradeoff is that it costs more to produce in America.

We imagine that European fashion brands would feel the same way about sourcing from other European countries. You can get a finished product faster and it’s easier to make sure that you’re complying with the law. Unfortunately, you’ll have to pay a bit more.

Fashion executives feel mostly the same about all of the Asian countries. It takes longer to get a finished product and it’s harder to comply with local laws, but it’s cheaper to produce there.

Mexico again shows that it’s unique. Clothes can get delivered quickly, but the overall cost is low and complying with regulations isn’t too hard.

Biggest Challenges in the Fashion Industry

Also as a part of the benchmarking study, fashion executives were asked what they thought their biggest challenges were: 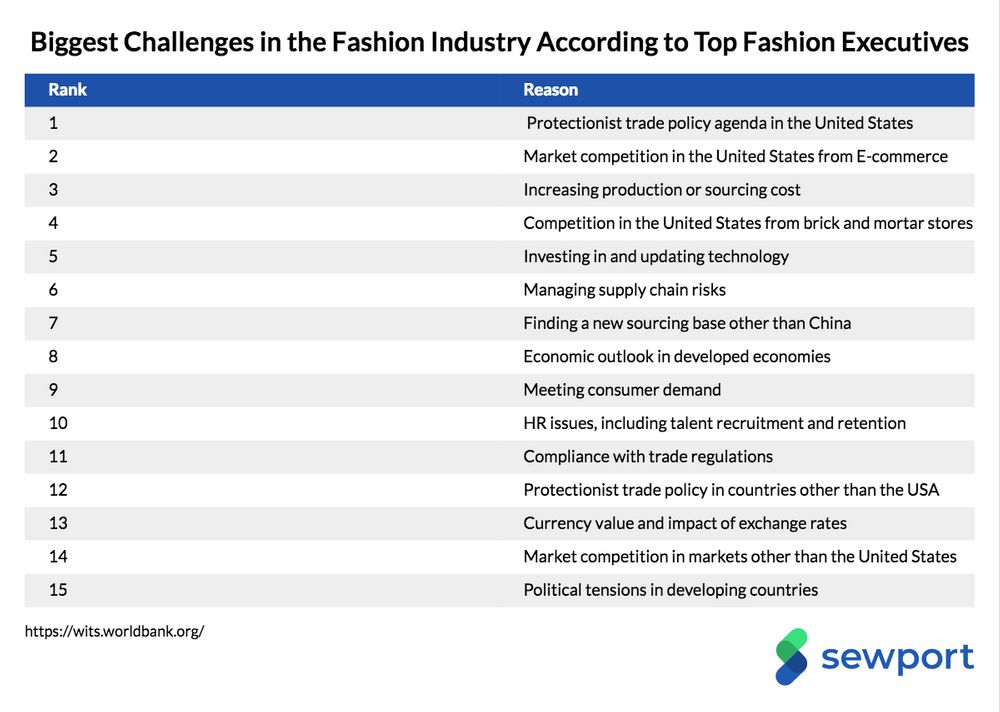 Their biggest concern was the rising protectionism in the United States. Growing trade tensions have resulted in the US putting tariffs on goods from various countries. While it looks like most of the trade tensions are temporary, it’s uncertain whether the tariffs and disagreements with China will stop anytime soon.

That explains why the seventh biggest challenge according to fashion executives is to find a new sourcing base outside of China. The rising labor costs and growing political tension means that it’s no longer as attractive as it once was.

The third biggest challenge is rising production cost, which means that there will probably be an increase in sourcing from the other Asian countries. We imagine that Mexico will become more and more attractive for reasons we’ve mentioned earlier in this piece.

Cost is far from the only concern. Besides worrying about complying with trade regulations, executives are worried about dealing with political and trade tensions among countries.

This shows that executives have to make tough tradeoffs. They want to keep their sourcing costs low, but they also feel that there are significant political challenges that come from dealing with developing countries.

It’s no secret that there have been significant human rights issues in the garment industry. Several brands, like Nike, have suffered a hit to their reputation when consumers found out that they employed in workers in questionable conditions (often referring to these factories as “sweatshops” colloquially).

As a result, many companies now make sure that they screen their manufacturers thoroughly. The last thing they want is a picture of their clothing being made by workers in substandard conditions.

Here’s a map of countries of the world with their ranking:

In general, the developing countries have fewer protections for their workers than developed countries. A significant portion of Europe scores a 1 or 2. Almost all the Asian countries that export significant amounts of clothing score a 4 or 5.

Notably, America scored a 4 and Greece scored a 5. This shows that there are significant workers’ rights violations even in developed countries.

Obviously, this report is a generalization and you have to check a manufacturer specifically to know how it treats its workers.

Another concern for many brands is whether their clothes are made in an environmentally friendly way. You probably don’t want your brand connected to a factory that significantly pollutes the environment.

Famous clothing brands like H&M and Zara have received significant backlash for working with polluting factories in Asia. In order to prevent this type of incident from happening again, many brands have emphasized the importance of sustainability.

We didn’t find any research specifically on environmental friendliness by country for the garment industry. We did find that Yale University created an Environmental Performance Index , which rates each country on a scale of 1-100 as to how it treats the environment.

Here’s a map created by Yale to show how environmentally friendly each country is:

Here’s the same data in a chart, also created by Yale: 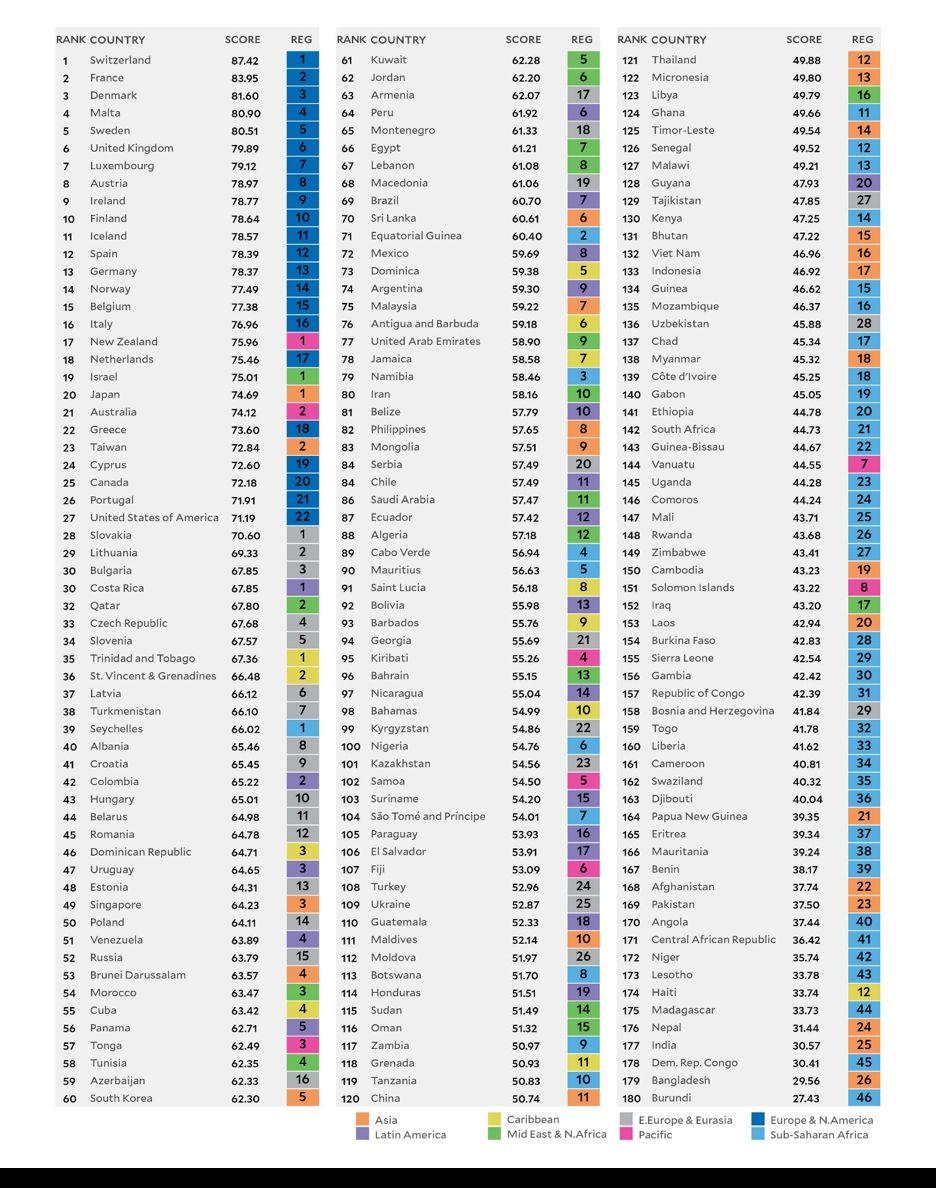 We see a similar dynamic to that when we looked at labor rights. The developed countries are much more environmentally friendly than developing countries.

What is different is that America is one of the most environmentally friendly countries even though it ranks among the worst countries in treating workers.

Again, we have to emphasize that you still need to analyze each individual manufacturer. These rankings are simply a good rule-of-thumb to know how environmentally friendly a country is overall.

Here are our biggest takeaways:

Finding a clothing supplier and manufacturer is a complex task (trust us, we know about it firsthand). There are many factors to consider and you can run into trouble if you pick the wrong partner.

Part of our research was meant to show how simply looking for the cheapest option is not always the best choice. There can be significant issues when sourcing from a developing country like China.

Your brand could receive big backlash for working with substandard manufacturers. If you’re not careful, you could partner with a factory that abuses its workers or is not environmentally friendly.